Each neighborhood of the city appeared to be made of a different substance, each seemed to have a different air pressure, a different psychic weight: the bright lights and shuttered shops, the housing projects and luxury hotels, the fire escapes and city parks. (Teju Cole, Open City)

Paris is made for walking. It is known by walking.

At least, that’s what I’ve come to believe over these first two weeks while doing my best to make Paris my new home. Classes haven’t started yet, and my study abroad program chose to spread out its orientation program over two weeks, which leaves me with a lot of empty time. Already I can see I’m approaching the city in a totally different way than a tourist who has four or five days to ‘do’ Paris.

They’re not here in great numbers at this point—that will come starting April, is my guess—but they are spending their time efficiently.

The game has changed: Nobody walks around with guidebooks or maps anymore. It’s still easy to tell who they are. Individual travelers or small groups stand on street corners and stare down at a screen, rotating and moving to and fro in order to get the little Google Maps-arrow to point the right way—as if you couldn’t just look at the street names or any nearby landmarks. Or, God forbid, ask someone in a shop or a café. Outside of rush hour, even a Parisian passerby might help you.

The second type of tourist is on a guided tour; but gone is the funny little old man, no doubt a volunteer, with his metonymical umbrella pointing the way. Now tourists strut along speedily with ear buds rattling off the various historical facts and events that float somewhere in the sky above their heads or surround them in the streets and walls—of Haussmannian boulevards and apartment buildings, constructed in the late 19th century for Napoleon III, following the 1848 June Days uprising, for example.

What do you want? I wonder. I’m the opposite of the harried tourist in an endless quest for the expected, the already discovered world of pictures and postcards. I am waiting for the unknown, bored-that state of suspended anticipation in which things are started and nothing begins, the mood of diffuse restlessness which contains that most absurd and paradoxical wish, the wish for a desire (Adam Phillips, “On Being Bored”).

I’m hoping to waste time and to do it well. With Paris enchanted by a spell of cold, dry, sun-drenched weather—like the best winter days in New England—I set out for the streets.

Turns out that amount of research on Yelp or Tripadvisor—nor the hippest guidebook or private tour—will beat aimless, solitary walks through an arrondissement for the moments of wonder and pleasant surprise that come with making a personal acquaintance with Paris.

An arrondissement is the thing for the day—each arrondissement has several quartiers, each which in turn has its own bookstore, hip coffee shops, a Sunday market, little municipal libraries tucked away in side streets, a small, cozy museum about a forgotten artist, and a boisterous bistro, where people buy lottery tickets and cigarettes, read the paper, and slam down an espresso (usually just 1 euro if you’re standing at the bar).

Of course, I am only the last to join a long line of flâneurs—there’s Baudelaire, Flaubert, Balzac, shadowed by their various fictional characters, and on the American side, we have Henry Miller, Walt Whitman, and, in a sense, good old Thoreau.

Historically male, this figure turned up in nineteenth century literature as a keen observer of the bustle of modern life—with his nose up high, his top hat on, and his arms clasped behind his back, the flâneur would stride up and down Hausmann’s broad boulevards, stopping and turning frequently to peer into shops or exchange a witticism in a café, only to move on to the next interesting little spectacle. Detached from the humdrum of working days, with money and time to spare, he is open to all impressions, and his city becomes layered with meaning. The flâneur appears at a time where rapid changes in technology and development have created an estrangement between individuals and their environment—so viscerally expressed in Kirchner’s “Street in Dresden”—but this very estrangement allows him to rise above the myopic vision of the masses and grasp all the fragments of modern life to form an interpretation of the whole.

He is “a central oyster of perceptiveness, an enormous eye”, writes Virginia Woolf in her 1927 essay Street Haunting.

Henry Miller’s Paris, as he writes it in Tropic of Cancer, for example, is really just a study of Miller—to the flâneur, the gleam and glass of the arcades, the vitrines, and the department stores are nothing but mirrors in which he can study himself with a Narcissus-like gaze.

Whitman was different: a romantic in the heart of Manhattan, he found solace and joy in the “democratic vistas” of city parks and Broadway’s ever-present streams of humanity. For Whitman, this chaos is a plentitude, a blurring of the hard boundaries of the self. Through it, he defines and creates himself, in the interdependence of You and I. He not only actively absorbs his surroundings but also expects whatever You he makes contact with to do the same. In this way, he is far from the aloof, cool, and keenly observant flâneurs in Paris that Walter Benjamin wrote about.

I’m at the café de la Mairie, place Saint-Sulpice. Years ago, Georges Perec was there too and wanted to try something new: to describe everything that happens in this one particular place. From October 18 to 20 1974 he took notes for his Tentative d’épuisement d’un lieu parisien (Attempt at a Description of a Place in Paris). Here’s a fragment:

In a magnificent ensemble, the pigeons fly around the Place [St. Sulpice] and return to roost on the gutters of the town hall.

There are five cabs at the taxi stand.

The bells of St. Sulpice begin to ring (for the hour, no doubt).

Three children being taken to school. Another apple-green deux-chevaux.

The pigeons fly around the place again.

A 96 goes by, stops at the bus stop; Geneviève gets off and goes down the rue des Canettes; I call to her, rapping on the café window and she comes over to say hello to me.

We look at what we care about and what we want to act on. When we move and walk around, we gaze into the vanishing point of our goals, seeing nothing but obstacles in the faces of people we find on the same cramped sidewalk.

But Perec is capturing life, and nothing more, before it flutters away like a bird. The environment only consists of these unimportant things: what we see, hear, and smell—which we pay no attention to but what makes up our daily lives all the same. Perec gives us the plenitude of nothingness. The richness of the ordinary. He draws it from the bottomless well of boredom. 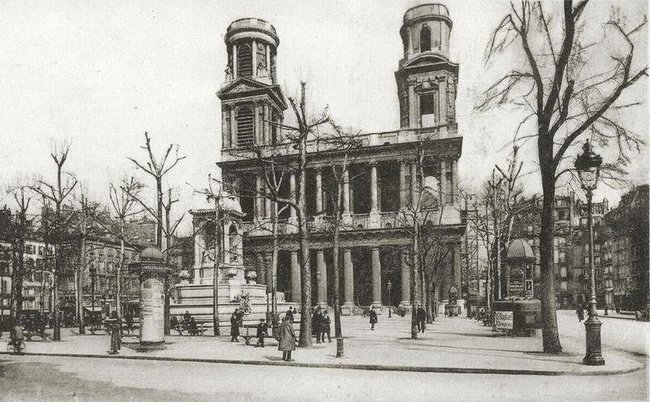